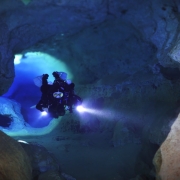 They used it very successfully at the DEMA show in Orlando at the end of 2019. They played the video on large screens on their stand. So it ran as a loop tape so was screened throughout the whole the show.

DEMA is the world’s biggest dive show. Members of the dive industry from around the world attend. Tens of thousands of the most important members of the diving community saw the film during the 4 days of the show.

We have extensive underwater stock footage from around the world. This is just one example of how it can be used…